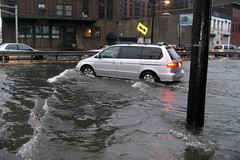 NJ - Hoboken: Nor'Easter
Originally uploaded by wallyg
I love Hudson County voting, particularly the contested areas that seem like war zones with people in colorful outfits trying to stop pedestrians (and drivers) in the rain, making sure they vote. "This isn't my ward, sorry, good luck." Even in my uncontested ward, there were people getting drizzled on for referendums alone. It's kind of appropriate that it rained today, considering the flooding that's plagued the town has finally become a political issue. See my posts about the goddamn apocalypse that hit us last spring here, here, and here. Remember when I had flaming ash falling from the sky as the waters rose and ruined hundreds of cars while the city was incapacitated for days? Yeah, that's got voters in some wards actually showing up to vote.

Despite us being a 1.3 square mile little town with under forty thousand people, and this being a mostly uncontested election except for a couple of local votes and some referendums, a dozen deputy Attorney Generals are coming to make sure it's fair.

I voted for parks and stem cells before getting caught in flooding (ha ha) my side of the Pulaski Skyway. The woman working my booth made the "I have an obvious agenda but can't say anything" comment of, "Don't forget the referendums, like..." I smiled and replied that it was the only reason I was there, we exchanged a electorial grin of dubious legality, and I ducked under the curtain.
This morning

dosboof asked if I was in the Iron Maiden Fan Club for advance tickets, when I realized that I had been missing my Iron Maiden RSS feed and let the membership expire. D'oh! Managed to re-join in time to snag some for the only show announced for this coast.
Collapse