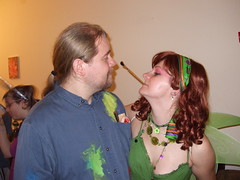 jedimentat picked up some absinthe she had been reading about, and got the idea to dress up as a green absinthe fairy for a party in the city this past Saturday. Wracking my brain for costume ideas, I bounced a lot of ideas off people but still came up short.

kikibird liked the idea of me dressing up as Lucius Malfoy, but

graye thought I'd be better as Kael'thas Sunstrider, though glowing magical green balls were hard to find. Going the coupley route,

graye suggested a famous absinthe drinker, which led me to August Strindberg, possibly with a pink balloon.

jedimentat convinced me to do the more recognizable and Halloween-ey Van Gogh instead.

jedimentat, and I went to Arthur's in Morris Plains for steaks. Saturday, during the day,

jedimentat and I went to an awesome costume store in downtown Somerville where we purchased the finishing touches for my costume, then we had some Lebanese food nearby. Swinging by her parents' place on the way home, we made use of her mother's art supplies to paint up an old pair of pants and shirt. We headed back to Hoboken, where we got ready. 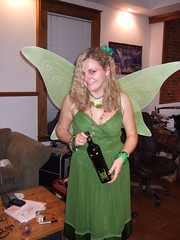 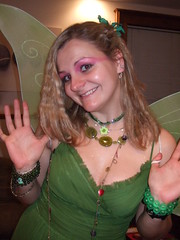 First she turned into the Green Fairy.

While looking up which ear I had to bloody, we found out that the lady of the night who he gave his ear to has the same first name as 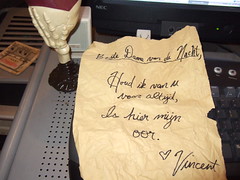 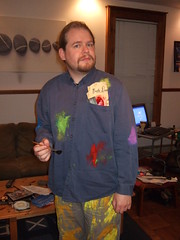 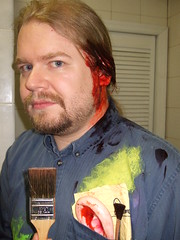 She wrote up the note, I got dressed up, and I got bloody.

See the rest of my photos here, or read

It's odd when you hear about an earthquake from your guildies, and amusing when they mention it casually while urging people to get moving with their duties faster. Hope everyone and everything's ok.

Glad there's others on the wait list, so I can catch up on more BSG while working on my fishing skill and doing French homework.
Collapse