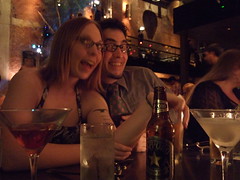 DSCF1396
Originally uploaded by Kingfox
Ten years ago in August, when Skynet was supposed to have gone online according to the second movie,

stepson called me up to let me know that it was time. And Skynet would have gotten away with it too, if it weren't for those damn meddling time travellers.
Despite New York City being such a huge city with a million hidden treasures to find, after finishing dinner at Tao for

johnstevensaul's graduate school graduation on Saturday, the line at Pegu Club (first time I'd ever seen one in over a year of going there regularly) led a few of us to Cub Room, the same place we'd had a horribly shitty restaurant week experience at a few years prior. The number of times I've ran into random people I know on the street or turned a corner to find a place I'd been years before still entertains me. I know patterns are repeated, but it seems that trying to get away from the directions and areas I know so well just leads me back to forgotten familiarity.
Saw Sir Ian McKellen on Sunday as King Lear. While waiting for

maidoftheshore and her posse to show up (made great time from Jersey), he came out and shook everyone's hand. As

jedimentat pointed out, I shook the hand that wielded Glamdring. That's some hot shit, right there. The show itself was awesome, a really well put together production. I've never seen the storm done so well on stage.
Taking classes as a staff member, I'm always appreciative of having a student employee in one of my classes to ask for notes from when I have to miss class. This semester it's just a bunch of freshman girls in my class, so no such luck. After missing class due to a cold yesterday, I was prepared to be the creepy guy asking for notes until my professor emailed exactly everything that was gone over, everything discussed for people to refer to later, and everything due at our next class. I think I've only had that happen one other time in my over a decade at Drew. Way to go, French professor!
Today at work I trained the younger brother of a former student employee (there's never nepotism in my department, I swear). When locking my workstation to give him a tour of the physical helpdesk, he noticed my Iron Maiden wallpaper. Turns out he was at one of the Iron Maiden concerts I was at four years ago. We discussed the band and specific albums for a bit, as I noted that he was ten years younger than me and I had gotten into the band before he was born. "I even listened to Bruce's solo stuff from when he left the band when you were... five."
Collapse