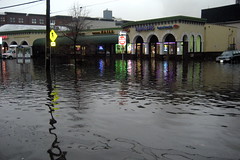 NJ - Hoboken - Nor'Easter 2007-1
Originally uploaded by wallyg.
That lake? There's the BoA ATM I sometimes hit on the way to work, as it's right down the road from where I live.

"We have at least 50 state roads right now that are impassable," Codey said this morning. "This is like a blizzard without the snow."
In a statement released this morning, state officials said the state government, Garden State Parkway, New Jersey Turnpike and mass transit would remain open today. But commuters should think twice before leaving the house.
"Residents should not travel unless necessary. If you must travel allow yourself plenty of time to get to your destination," the statement said.

I'd just suck it up and wade my way to the train station, as some intersections between where I live and my car are closed off (and that's assuming I can get my car OUT of town), but already they've got train lines are suspended from the flood. Wheefun. And lots of schools are closed. I do enjoy that our acting governor instructed people to watch The Sopranos last night as a way to deal with the storm.

Check out some amazing photos of the fire and flooding over here, or some intense videos from right next to the blaze here.

A Jersey City firefighter asked a fire dispatcher which was the best route into Hoboken, and the dispatcher replied: "Take your pick - every one of them is flooded."

I'm dry. My car's fine. A lot of cars aren't. If I had parked south of where I live, or a few blocks north of where I did, I would have gotten water damage. Fortunately, I got a spot on fairly high ground. The pictures from the other areas are pretty bad.

Took a walk around the "Mile Square City" during low tide this afternoon. Some roads were still blocked off, many vehicles stuck and unable to be towed out, and plenty of businesses closed. Countless basement businesses or apartments had hoses coming out of a window, shooting water onto the street. Beowoof was just about the only basement business that wasn't closed. Sewer grates were backed up, or in some cases seemingly ejecting sewage. I walked by a number of cars that had condensation on the inside of their windows, where water had penetrated the cabin.

As of the evening commute, the only way in or out of the town by road was through the bridges that lead to the Lincoln Tunnel (the worst path due to traffic, even on a good day). The southern end (my usual route) was still completely flooded out and the western bridges were no good due to a wall collapsing into a viaduct. In the video statement from the mayor above, he advised people to not have friends visit, and for outsiders to avoid the town unless they've got a medical procedure being done at our shitty hospital. I've got supplies, I've got homework to do, I'm pretty fortunate.
Collapse