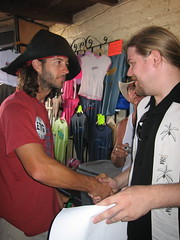 IMG_0380.JPG
Originally uploaded by Kingfox.
After driving to Rocky Point and back (being the eldest member of our crew), spending three of the past four nights sleeping on floors, having eight thousand dollars of credit card fraud perpetrated against me, and making stupid mistakes insofar as flight dates and the like, I'm on my way home. We've got an hour and a half left (wow, an hour went by already) to kill in the airport, and

jenniever's passed out next to me.

See the photos from

jenniever's camera, see the photos from

jennifriend's camera, and see the photos from our host's camera later on. Because really, there's nothing more entertaining than looking at someone else's vacation photographs. Imagine I've served you a watered down mixed drink, sat you in an uncomfortable chair, and started explaining each of these photos at length. Isn't being able to ignore them or view them in a quick flash slide show so much better?
Collapse