So every Monday night,

jenniever and I go out together, as many other couples do.

jenniever had an informational session about a IT management program she was interested in, so we were going to grab some shabu-shabu in the city. However, she's had a pain in her side since Thursday, and her doctor today recommended that she go to an emergency room, so we drove up to a hospital instead. Tonight's date consisted of a romantic drive, some White Castle, and hanging out in the hospital for a while. After she insisted I go home to get sleep/do work/whatever a few times, I left her there, which was tough to do. But it's the hospital up north where she was born, near both of her parents and I'm still just a phone call away.

So why the hell did we go up to the hospital she was born at instead of the hospital two blocks away from our apartments? While visiting her doctor, after they told her to go to an ER when she got a chance, she mentioned that she'd be going to St. Mary's. The doctor hesitated, and calmly asked her if she had a car. When she replied in the negative, the doctor halfheartedly told her that they GUESSED St. Mary's would be okay. And that's both why she's at a hospital in Northern Jersey, and why St. Mary's might be shut down.

I love how connected the world is. When searching for information about the shabu-shabu place, one of the top hits was this review by

fatasspenguin, who grew up with

jenniever. On the review was a link to

shmivejournal (who I sorta grew up with)'s latest claim to e-fame. When the Google search result came up with the line "Quickly Shabu Shabu wins the award for "least eye-raping interior in Chinatown" I've seen so far." I knew I had to read the review. When

jenniever came across it at the same time and pointed out who it was, that was just icing on the cake. A couple of days ago I caught up with Scrubs (insert link to me whining about no one telling me about it until recently), and the most recent episode I saw featured a recurring gag about a nurse having a "date night" with her husband. On our next "date night", I take

jenniever to the hospital. We end up having White Castle, and I end up finding parking next to the basketball courts from the opening of Harold and Kumar go to White Castle. Finally find time to catch up on Sopranos, right before I drive past the Badda Bing. Bouncing around on Sirius channels, Layla comes on just as I drive through

jenniever and I have been exchanging text messages. I hope they find out what's wrong with her, and that it's nothing serious.
EDIT: Self-portrait she sent me (and gave me permission to post) from her new phone: 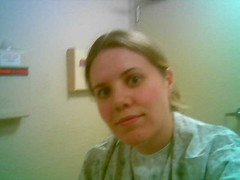