redvector, dressed as a middle-aged corporate woman. His brother brought one of their LARPing weapons, as he was She-Ra. There was a wide variety of fake women and men, and costumes that ranged from the hastily put together to the obviously well constructed. Me? I went as a lazy female college student. So

weaponjx and I agreed to try out for the rugby team. 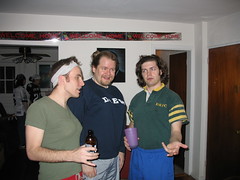 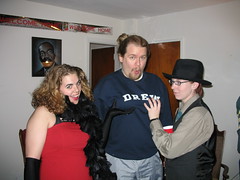 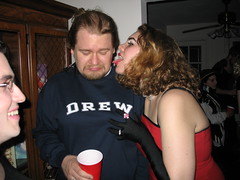 Oh, hell, just look at photos from the party taken by

windexcowboy, who had an awesome dress and hat.

It was entertaining to be at a party where a bunch of guys were standing around talking about their bras and other fashion accessories in a serious manner. There were also a wide variety of breasts. For the sagging look,

weaponjx used the rolled socks that many people went with, but left them slightly unrolled near the top to get a slight droop, and used a four sided die's point in order to imitate the nipple.

jenniever bought me a bra (44 D, in case you were curious) which I stuffed with water balloons wrapped in socks, to get that perky look and feel. Some guys went so far as to shave their legs, others didn't even bother to shave armpits or facial hair.

Also, I now understand that many exes of mine had their breasts change in size due to one reason or another, and ended up with ill-fitting bras. This is why they loved it when I scratched under the strap for them. It all makes sense now.
Collapse