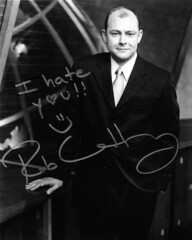 From Wednesday's Daily Show, when you could have seen that awesome historian who I saw speak earlier that night at

drewuniversity, Rob Corddry's list of hate. One of those is an email address, which has a funny response message. The talk itself was awesome, I should pick up one of his books on "freedom". The guy had some excellent points about the changing perceptions of what freedom was depending on who was in charge and who we were fighting. Naturally, an older person in the audience asked why this generation of college students weren't up in arms like his generation was back in the day. The answer? Fear. He provided a series of examples from prior wars to illustrate his point. Great speaker, I recommend his shit.
Planar fun for monkeys and robots!
Stupidity and hydrogen, people. And sometimes there's stupidity ABOUT hydrogen.
Yanni and Hasselhoff are both accused of abusing their wives recently. That's nuts. The little new age Greek and the guy writing sappy love songs. Meanwhile, Kris Benson gets back together with Anna.
The Gospel According to Judas, with an interesting take on things closer to Kazantzakis and Scorsese than Fitzgerald and Gibson. Rob Halford was not available for comment.

runstaverun led me to believe that the email address had an auto response message. Not so! I got my own reply, including the lovely photo suitable for framing you see in this post. Funny stuff.

redvector's got some competition!
Collapse