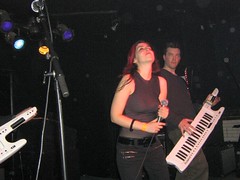 IMG_0555
Originally uploaded by six times mighty.
So, last Friday, we did our usual

jennifriendfoodfriday thinger, but instead saw a show in the city. For the food part of JFFF, we hit the downtown Les Halles, which was part of the great Bourdain fiefdom, yet different in some noticeable ways. More casual dining options, fancier decor, but less of the "traditional French Brasserie" feel. The portions, if I'm not insane, seemed smaller than those at the Park Avenue location.

jenniever and I both agreed that it was good, but not as amazing as the original location. Maybe not enough Bourdain. They didn't have my favorite dessert, and the waitress even admitted that the Park Avenue one had the better desserts, but offered up some nice alternatives from their menu. Don't get me wrong, it's still well worth trying, but it's obviously a place meant for the Wall Street crowd. The extra hike to the better location is well worth it.

So why did we go to the Lesser Les Halles? Because we had to go see a show!

kikibird had often played Freezepop for me in the past at their place or during a car ride, and I had enjoyed it, despite the lead singer not really being married to Chris Onstad from Achewood. So when it was suggested we check it out, I was down. It was the same place that Brother Joe or Cousin Jim or whoever played one prior night, the Pussycat Lounge. Any venue with a strip club on the first floor that's next to a 24 hour sketchy sushi purveyor with a porn store next to that can't be all that bad. The band before them was... special. God bless. Freezepop themselves were a lot of fun, how often do you get to see two keytars on stage at once? The music, however, seemed better to me in the studio than live - the exact opposite of VHS or Beta. Considering the problems I've seen acts have there with the sound system, I wonder how they would sound elsewhere. But the audience more than made up any sonic lacking. Between insane thumb waggler who made them a picture or the hot dancing geek girl and her overly enthusiastic dancing and yelling boyfriend, it was a great show for watching people. We stood on the balcony, and had a perfect view of those folks, the Spock jacket guy, and all the colors of the rainbow that is NYC area Freezepop fans. They played the song about

jenniever's favorite character from Achewood, which was all I was really hoping for anyway, and was pretty damn enjoyable to boot.
Poor

jenniever is home sick right now, yesterday after a Church event for her father and a brunch with his family her nose just started running, and she hasn't been able to catch it since.
Collapse