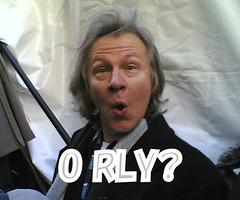 "I'm a dedicated listener. I wanted to see this happen," said Chris Casavant, who drove up at 4:30 a.m. from Farmington, N.J.

Asked why she was there, Donna Casavant made a face and pointed at her husband.

Every single person I've lived with since leaving

drewuniversity's dorms has been a Stern fan.

petemagyar's actually the smallest fan by far. This is the first place I've lived in where there wasn't a copy of all of Stern's books lying around. Father Joe had the books and other media, and would lecture people at length at the Drew Pub about how brilliant Stern is. Jaime and Jeff were addicts, and would make it a point to listen to him. Dave was the biggest fan of them all. He'd have the show come on every morning at 6, and listen to it in his sleep before shambling off to work. Beyond watching the E! show, he even taped Son of the Beach. Me, I've been a fan since the Channel 9 Show.

Still listening to the Yahoo stream of his farewell with

It'll be interesting to see how things play out with his move to satellite.
Collapse